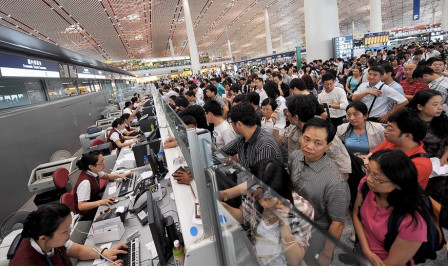 With hundreds of airports around the world it is not surprising that there is a list of the world’s best airports based on their on time performance for departures. Much like the best airline rankings for on time departures, airports are rated on the number of flights that depart on time.

Airports may have to wear the airline delays caused by airline equipment or staffing issues. The bigger issue for airport delays and hence the annual report by FlightStats, is the overall delay statistics that reflect the efficiency and the ability of the airport to process passengers as they arrive, transit, and depart at an airport. In some cases the delays are due to physical structures of the airport not being able to handle the volumes coming through for departures and transit due to airport design, air traffic control limitations, or just bad check-in / immigration clearance issues. What ever the issue, the flights are delayed and the airline passengers are disadvantaged.

Five Naughty Airports in Asia for delays and departures

Ten Amazing Airports in Asia for On Time Departures

In Asia you can easily see the best and worst of both worlds as the number one airport in the world, Itami Airport – ITM in Japan, and the worst performing airport for on time departures in the world, the main international airport in Jakarta (Indonesia) and Netaji Subhas Chandra Bose Airport (India) both are located in the Asia Pacific region.

Five Naughty Airports in Europe for delays and departures

Ten Amazing Airports in Europe for On Time Departures

Being big, famous, and having your own TV special about your airport does not necessarily mean you are doing very well on getting planes off the ground on time. Simply look the naughty airports for this region to figure out where the bottle neck is for on-time departures. The good news is if you are in South Africa you have good chances to leave on time.

Five Naughty Airports in North America for delays and departures

North America is pretty easy to figure out. Avoid the east coast cities of the USA as they are more inclined to delays and for best on time flights use a western city of the USA/Canada or fly out of Canada.

Five Naughty Airports in Latin/South America for delays and departures

South America is pretty average for delays. The surprise? The Panama City, Panama International airport PTY, which is the second best in world for being on time with departures. If you are going to/from/transiting Brasil you are in for a good chance of being on time for your flight departures as the country has the majority of the best on time airports in South America.

Is your favourite airport…or least favourite airports missing from this consolidated list of airports? No problem checkout the full list of global airport rating in the annual on-time report at FlightStats.

What’s next? Airlines that make you cry… as your flight is delayed.